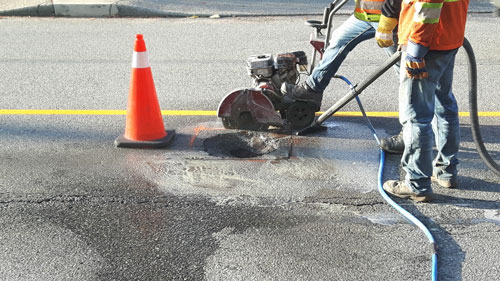 There are several reasons why asphalt is a fantastic choice for a wide variety of paving jobs. It’s durable, easy to install, environmentally friendly, and not to mention the fact that it’s one of the most inexpensive paving materials on the market.

A properly installed asphalt paving job can provide decades of service but as the old saying goes, nothing lasts forever.

Eventually, after years of being subject to consistent wear and tear, your pavement is more than likely going to need some type of repair work to remain in optimal condition.

You might start to notice that certain areas of the pavement are beginning to crack, or you could see potholes or other surface irregularities begin to emerge.

Some of these issues may appear gradually over time, while others might take you by surprise. Below are some of the most common asphalt problems to look out for, as well as what your paving contractor can do to help remedy those issues: 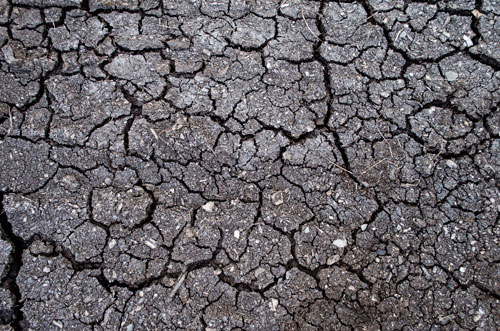 This extremely common pavement problem definitely lives up to its name, since once the blacktop has become riddled with these types of cracks, it can begin to look like the scales on an alligator’s back.

Alligator cracking is often referred to as “fatigue cracking”, because it is essentially a structural failure that is brought on by the pavement’s inability to consistently handle load stresses.

There are a number of reasons why this type of structural failure can occur, including weaknesses in the subgrade or subbase, inadequate drainage, an asphalt surface that is too thin, or some combination of all of these factors.

On paved roads, alligator cracking often starts as longitudinal cracks in the wheel path, but over time it can worsen due to increasing traffic.

Since this type of asphalt defect is the result of a structural failure, your paving contractor will more than likely have to perform what is known as a full-depth patch, which is where the pavement and base below will need to be dug out and rebuilt. 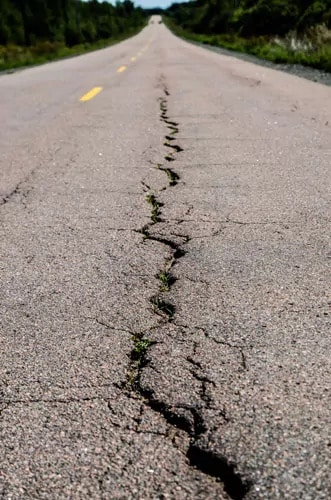 Longitudinal cracks are basically cracks that begin to form in the same direction as the centerline of the asphalt laydown direction.

In other words, these cracks will typically be parallel to the edges of the road or driveway.

One of the primary culprits of longitudinal cracking is reflective cracking, which are breaks or cracks in the underlying layers of asphalt.

This is due to movement taking place at the point of the original surface crack. Poor joint construction and/or pavement fatigue are additional reasons why longitudinal cracking can develop.

For this type of paving problem, your contractor will more than likely seal up the cracks up to prevent moisture from seeping down into the subbase. This can only work, however, if the cracks measure no more than half an inch deep.

Any deeper and your paving contractor will probably have to remove the cracked layer of pavement entirely, replacing it with a completely new overlay.

As the name suggests, block cracking basically looks like large interconnected blocks that are often rectangular in shape and configuration.

You can think of block cracking as how alligator cracking would look if you were to see it at 10x magnification. 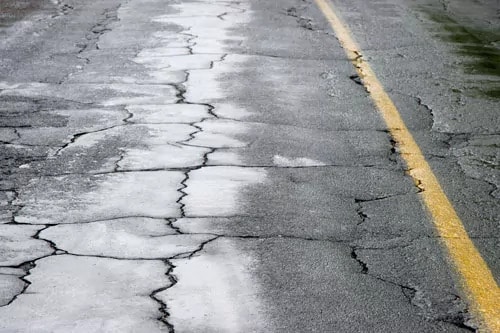 Unlike alligator cracking, however, block cracking is not associated with load stresses. Instead, it is typically caused by shrinkage of the blacktop pavement due to problems with the binding agent that is part of the asphalt mix.

When this binding agent cannot expand and contract with fluctuating temperatures, it creates stress within the asphalt that can basically only be resolved by cracking.

Sometimes this happens due to the way the asphalt mixed at the initial installation. If the mix was too dry when it was placed, it can have this type of effect later down the line.

Block cracking can also be caused by using low-quality asphalt binder, or by mixing low penetration asphalt with fine or absorbent aggregates. 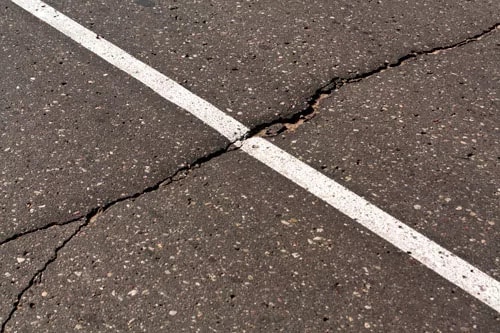 Transverse cracks are cracks that run perpendicular to the laydown direction or centerline of the pavement.

In this regard, they basically run in the opposite direction of longitudinal cracks.

This type of cracking is usually a symptom of problems with reflective cracking under the surface layer.

Transverse cracks are considered to be a type of thermal cracking because they can sometimes stem from the stresses of daily temperature fluctuations, but they can also be the result of unskilled usage of paving equipment during installation.

In addition, there are cases where transverse cracking can result from the structural failure of an underlying subgrade and/or subbase.

Similar to longitudinal and block cracking, for your paving contractor to fix this they will more than likely seal up the crack as long as it measures less than a half-inch in depth. Any more than that, the entire pavement layer will need to be removed and resurfaced with an overlay. 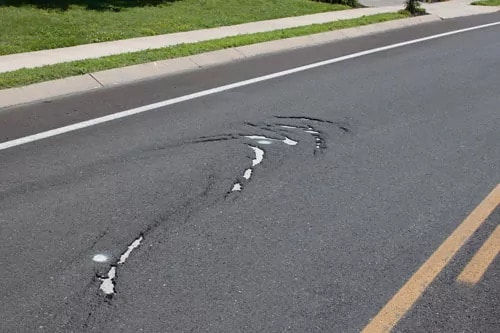 Slippage cracks usually take the form of crescent-shaped or semi-circular cracks, and are a sign of a lack of adhesion between the asphalt layers.

As the name implies, slippage cracks occur when the surface layer basically “slips” over the underlying layers, creating what in effect are “stretch marks” in the asphalt.

A common reason for this lack of adhesion between layers of pavement is the presence of excessive oils, dirt, or other contaminants that basically block the adhesive from taking hold.

As with many other asphalt repair problems, slippage cracks are usually the result of poor installation practices.

Subpar paving contractors will often fail to apply what is known as a “tack coat” between the asphalt layers as they’re being laid down.

Without this key layer of adhesive material (also called “slow-setting emulsion”), it can be difficult for the previous layer to stay in place as a new one is being laid on top of it.

Your paving contractor will typically fix this type of issue by removing any area where the slippage cracks are found, and then replacing the asphalt with a partial or full-depth patch, depending upon the severity of the problem. 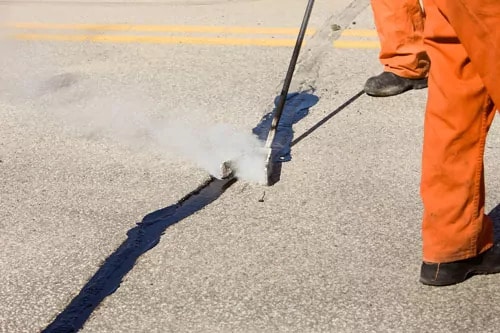 The reason why they’re called joint “reflection” cracks is because the cracks in the asphalt emerge directly over the pavement joints in the underlying rigid layer.

To repair this issue, your paving contractor will normally seal the cracks so that water won’t be able to seep down into the subgrade.

Once again, the cracks cannot be more than half an inch deep for this to be effective. If the cracks are deeper, the cracked layer of pavement will need to be removed and replaced with an overlay. 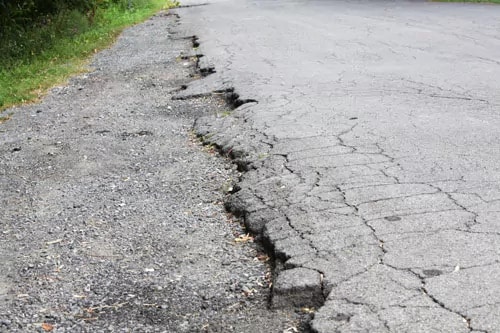 Edge cracks are long, typically shallow cracks that tend to travel parallel to the edges of the pavement and normally within one to two feet of the edges.

They often mimic the path that the pavement edge follows so that if you were to cut off the asphalt at the cracks, you would simply have a narrower pavement path.

Edge cracks are often the result of poor drainage, as well as inadequate support at the edge of the pavement. This can happen due to improperly “tamping” (packing down) the asphalt at the time of installation.

Skilled paving contractors will usually tamp the edges of the asphalt at a 45-degree angle to provide the necessary support for the asphalt layer.

Other common causes for edge cracks are heavy plant growth along the edges and/or heavy traffic. Your paving contractor will usually remedy this situation by first removing any vegetation along the edges and addressing any slow or poor drainage issues.

After that, they will seal or fill the cracks to discourage any further crumbling or deterioration. If necessary, your contractor may also need to reconstruct the pavement area to full width to ensure that any lingering support issues are fixed.